Ode to the Multi-Use Trail

Sometimes you don’t know what you need until you have it. Today is day 38 on the road, I’ve run 169 miles since we left, and my first treadmill run didn’t happen until yesterday. We were in Amarillo, TX, there were severe storms in the area and the only roads nearby were too busy to run. So I pumped out a sweaty, boring five miles on the treadmill in the cramped hotel gym. On the heels of my treadmill run, I thought it would be appropriate to give a shout out to the multi-use trails I grew accustomed to while we were out west.

END_OF_DOCUMENT_TOKEN_TO_BE_REPLACED

Milestones and a 20-Miler 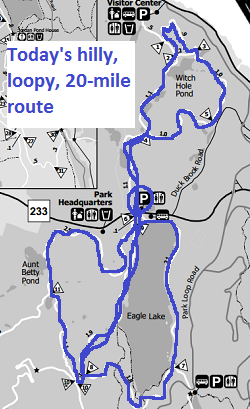 It’s been a week of milestones: selling the house, hitting 50,000 miles with Sal the Subaru, and today, celebrating our anniversary.  Last year, we snuck away to Bar Harbor to get married, and this year, we returned to town to celebrate the conclusion of a crazy first year while kicking off a new one.  We’re staying in the same room at the same inn, one with delicious breakfasts and cozy beds, and we’re enjoying the relative calm of a resort town before the summer season begins.  The weather has been perfect these past two days, and since we’re expecting rain later this week (while we’re camping, of course…), we’ve been playing outdoors every day.  Today’s adventure was a 20-mile bike trek across two loops of the carriage roads we hadn’t done last year, plus one we had.  We left from the Eagle Lake parking lot and headed north around the Witch Hole Pond loop.  It was an easy, rolling start to the day, followed by a moderate climb to some fantastic island views.  We then cruised back to the start of Aunt Betty Pond loop, a strenuous 6-mile section that managed to be uphill in both directions.  After returning via the Eagle Lake loop, we were sitting at 18.3 miles, so we pushed our tired legs a bit more to reach the 20-mile mark.  Along the way, I experimented a bit with video of our ride.  Maybe someday I’ll graduate to a helmet cam, but for now, I’m using a handheld one, which can be a little bumpy (so don’t watch if you get dizzy easily…).  The first clip was shot along a flat stretch and contains a brief narrative.  The second one is a bit longer, with very little narrative, lots of wind and a bit of speed.  I had the camera in my right hand, which is also my braking hand, so not my brightest move.  Hopefully the video gives a little insight into what it feels like to fly down a gravel mountain at 20-miles per hour… -J