Exploring Sabino Canyon and all its friendly inhabitants back in November, a full day capped off with tamales and beer to celebrate not getting bitten by a rattlesnake. Snake photo from AZ Game and Fish Department website; we didn’t stick around long enough to take one of our own.

Everyone we’ve encountered in Tucson has mentioned Sabino Canyon as a “must go” destination. By everyone, I mean our realtor, bartenders, hair stylists, neighbors, coworkers and pretty much anyone else who learns we just moved here. So on our first plan-free Saturday in town, back in November while I was visiting for the weekend, we headed up to Sabino Canyon to check it out for ourselves. END_OF_DOCUMENT_TOKEN_TO_BE_REPLACED

Our unofficial summer hiatus is over, and we’re getting back on the blog train from our new home in Tucson. (Well, actually, I’m writing in this post while in Provo, Utah, where we’ve been all week. M’s on a business trip here, and I’m taking the opportunity to explore and write…two of my favorite activities! More about Provo later.) We’d been splitting time between Arizona and New Hampshire for more than two months by the time we finally made our move official the day after Thanksgiving. Our trusty companion, Sal, arrived via car carrier the next day, and we promptly swept him off on a series of local adventures. END_OF_DOCUMENT_TOKEN_TO_BE_REPLACED

A few years ago, on a very lucky Friday the 13th, we eloped to Maine, specifically to Northeast Harbor, a tiny village at the mouth of Somes Sound, where the ladies in the Town Clerk’s office were giddy and gracious in hosting an impromptu wedding for us on just a few days’ notice. They served as officiant, witnesses, photographer, and florist, presenting me with a bouquet of fresh-cut daffodils from outside the building. We spent the rest of the weekend exploring the island by bike and foot. When we arrived back home, we sent the Town Hall crew a thank you note with Portsmouth chocolates and our favorite picture from that day. And so began our May tradition of adventuring on Mount Desert Island.

This weekend, we arrived on Friday for four days of hiking, running, writing, sleeping, and eating. Acadia National Park is the frequent site of the first three activities, while the Acacia House Inn is our preferred site for the last two. We’ve written extensively about our national park adventures at Acadia, but we’ve been remiss in writing about our favorite B&B, the place we stayed that first spring and almost every year since. Let’s correct that right now! END_OF_DOCUMENT_TOKEN_TO_BE_REPLACED

Back to the Alternative Grind

We realized today that we haven’t posted an update in close to two months. How does that saying go? Time flies when you’re exhausted, confused, and energized by new ideas? We arrived home from Germany at the end of September, having traveled for 12 of the 15 preceding weeks. Six weeks spent road tripping across the Canadian and American west followed by six weeks in Europe, with three weeks at home in between to do laundry, repack, and taper for the marathon. By the time we finally returned to our cozy apartment in New Hampshire eight weeks ago, we were jet-lagged, burned out, and ready to slow down. And we were supposed to leave in six days for our next adventure: two weeks of national park hopping in the Pacific Northwest. END_OF_DOCUMENT_TOKEN_TO_BE_REPLACED

We’re Off on the Road to Achill Island

Scenes from our stop at Connemara National Park

We left Clifden Thursday morning with our sights set on tiny Achill Island on Ireland’s west coast.  It was slated as a short drive (less than two hours), but we planned to take our time.  Our first stop—just twenty minutes or so from the inn—was at Connemara National Park.  On any other day, we would have trekked to the top of the park’s famous (and fog-covered) Diamond Hill.  But two days before a marathon is not the time to take on an unknown hike (any hike, really).  END_OF_DOCUMENT_TOKEN_TO_BE_REPLACED

A Change of Plans in Lake Louise

L to R: Late afternoon on the shore of Lake Louise; nearby Moraine Lake; a washed-out section of the Banff Legacy Trail; the electrified bear fence surrounding the campground; and post-run yoga overlooking the Bow River.

After leaving Jasper via the Icefields Parkway, our first stop in Banff National Park was the small settlement of Lake Louise, most famous for its ski area and storied Fairmont hotel.  The hotel sits directly on the glacial lake, but the shore area and trails behind the hotel are open to the public.  We headed to the lake the evening we arrived in an attempt to avoid tour bus crowds, and we were rewarded with a parking space close to the water.  The lake was pretty, but the light wasn’t quite right, and the scene didn’t measure up to either of our expectations nor to other lakes we encountered.  Moraine Lake in Jasper and Maligne Lake, just a few miles away from Lake Louise at the end of a windy mountain road, were arguably more picturesque…at least on the days we visited them.

We spent the night at the HI hostel in Lake Louise, conveniently located near the center of town.  Actually, town is an overstatement.  It’s more like a small tourist village within the national park, with one main intersection, a gas station, a few inns, several overpriced restaurants, and a gazillion tour buses.  In short, nowhere we wanted to be.  We went to bed early, much to the chagrin of the 20-something German guys with whom we shared our 4-person bunkroom. END_OF_DOCUMENT_TOKEN_TO_BE_REPLACED

The Rest of Jasper: Athabasca, Icefields, and Wilcox 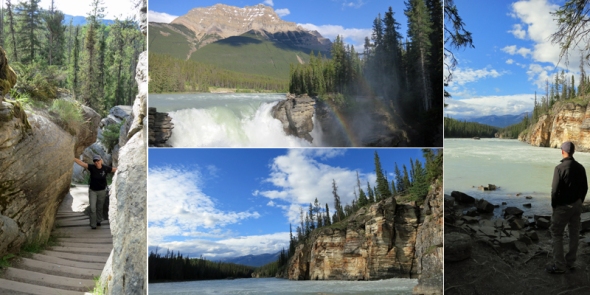 Scenes from the Athabasca River at Athabasca Falls, both above and below the 23-meter drop. While not exceptionally tall, the falls are some of the most powerful in the mountains due to the size of the river compared to the narrow canyon through which it flows.

Our visit to Jasper was the perfect start to our time in the Canadian Rockies.  Jasper is a mellow little mountain town that quickly became one of the highlights of the trip.  We weren’t thrilled to be leaving after just three days, but we were excited about what lay ahead: the Icefields Parkway and quaint towns within Banff National Park (Lake Louise, Banff, and Canmore).  END_OF_DOCUMENT_TOKEN_TO_BE_REPLACED 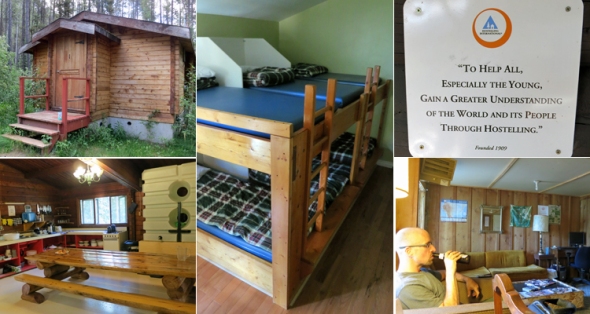 L to R/top to bottom: Our first wilderness cabin and rustic kitchen in Jasper N.P.; the offending 6-person bunk last night in Canmore; Hostelling International’s mission (They just need to add “up-close and personal”); and my mission tonight at Glacier N.P. (blogging and beer).

Prologue: I wrote this post last night while laying in the middle bunk of a six-person bunk bed (picture the middle seat on a plane…only for sleeping). As you can imagine, I wasn’t in the best of moods. As a result, the post is a bit of a rant, but it’s still mostly true. I’m writing this prologue from the common room of a rustic hostel in East Glacier, Montana, where the peeps are friendly, we have a private room, I’ve had two Montana beers and my perspective has “improved.” Nonetheless, I thought it fitting to share my honest hosteling experiences with you… END_OF_DOCUMENT_TOKEN_TO_BE_REPLACED

Jasper National Park (Put It On Your Bucket List)

Get your camera! (L to R): Random mountains at sunset and sunrise; scenic Lake Maligne; amazing scenery in every direction.

Greetings from Jasper National Park in Alberta, Canada…our first official national park of this trip! Jasper is the farthest northwest that we will venture this summer, and it is absolutely worth the 3,000+ miles we trekked across the continent to get here. Jasper is the largest of Canada’s Rocky Mountains parks, and it’s also less trafficked than Banff and Yoho to the south.  We try to avoid clichés and hyperbole here on WPG, but truth is, since we arrived in Jasper, there has been a stunning, mind-blowing, awe-inspiring, picturesque cliché around every corner.

We’ve been here for less than 24 hours, but it feels more like a week.  We’ve visited the Miette Hot Springs, sampled local brews, stayed overnight in a rustic wilderness hostel (no running water), ran four miles around town this morning (nearly running into an elk), and hiked a bit at Lake Maligne.  We are now back in town jumping on the grid for a few minutes before returning to the hostel (with a planned visit to Athabasca Falls on the way). END_OF_DOCUMENT_TOKEN_TO_BE_REPLACED

On The Road Again

L to R: Outside our building on morning #1, small town NH diner, Niagara rainbow, running by the falls in ON, and exploring Charlevoix, MI

Greetings from Grand Forks! So much has happened in the last few days, making it hard to believe we’ve been on the road for less than a week.  We’ve traveled more than 1,800 miles from home in New Hampshire to this university town on the Red River.

After setting out early last Wednesday morning, we were able to connect with friends from California (who happened to be in NH on vacation) and meet their adorable five-month-old son. We stayed in Niagara, ON Wednesday night and enjoyed a misty, rainbow-filled run along the falls in the morning before arriving Thursday afternoon at a friend’s house near Lansing.  We spent a sunny few hours floating around the pool, catching up on the last year and enjoying good company.

We hit the road again Friday morning and meandered END_OF_DOCUMENT_TOKEN_TO_BE_REPLACED